This is one of my favourite videos from Benjamin Harvey.

The first foundation: orchestrate the outcome!

People say "because I know the topic..." it's not about the topic, it's about the action! Leaders lead people to take action that's why they are called "leaders". Make sure that you are a leader when you get on the platform.

The second foundation: prepare your points.

Preparing your points require some simple elements first of all. We have to appreciate that there is one word in the English language that is critically important to any presentation. It's the most important word you'll ever use. The word, is the word - "YOU".

When I use the word "you", who am I talking to?

When I say "you", I'm talking to YOU. When it comes to presenting, at Present Like a Pro, we teach what's called The Telephone Test." It works like this; if you can't do it on a telephone, don't do it on the platform because it won't make sense.

I was taught things like "QUEENSLAND! HOW ARE YOU DOING TODAY?!" Basically, you're encouraged to pump up the audience into a collective frenzy, or to hype everyone up. And you're like "Seriously?!"

That doesn't fly here in Australia. But here's the thing, we have a bit of a thought virus that transcends generations here on this country and it's a very, very dangerous idea.

I'll explain the difference between America and Australia:

They go crazy! They're so happy for you, genuinely!

Now, if you get a new Mercedes Benz in Australia, you pick it up as late as possible from the dealer.

Hoping the sun has gone down, then you sneak it in to your garage, hoping none of your neighbours see it. And if anyone catches you driving, you sound "Uhm, uh. wha- this thing? How are you doing?"

You don't tell your friends for fear of being labeled.

"Ahhhh. You got a Mercedes Benz?" That's actually our culture, it's very sad that we hide our greatest successes from our best friends. That's sick, that's an illness because we love the battler until you become so wealthy and you don't have to battle anymore then we hate you with every cell in our body. 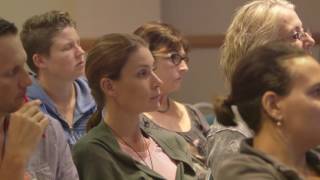